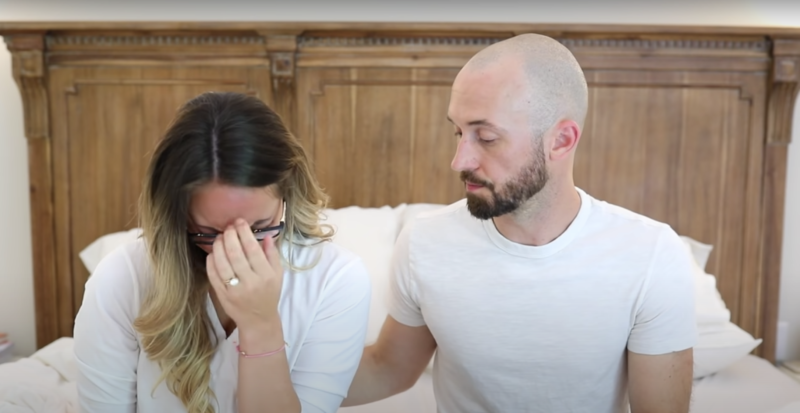 You represent the worst of both influencer marketing and adoption. I know, because I’ve been deeply engrained in each world. On the surface, the industries seem to have nothing in common. But—in the wrong hands—they are two sides of the same exploitative coin.

Publicizing the adoption story (read: trauma) of a child too young to give consent is bad enough, re-abandoning him when things got hard for you is almost unspeakable, but collecting a profit at his expense is a whole new level of insidiousness. So I have one question for you now: was it worth it?

I see you and your bright Instagram feed, Myka. It used to be my job to help “influencers” like you optimize your online presence and monetize your content. While working at a company called rewardStyle, I saw how much money could be earned from one YouTube video or Instagram photo.

Even on the lower end of Google Adsense’s average rate, let’s say $.01 per view, your (former) adopted son Huxley’s “Gotcha Day” video—which garnered more than 5 million views before you changed the privacy settings this week— could have made you upwards of $50,000.

Not to mention the commission you earned from those Amazon short urls listed in the description of your videos. The seemingly innocuous product recommendations from a fraudulent parenting expert put money in your pocket any time someone followed a link and purchased something from the website (even for days after the original click took place).

The disclaimer at the bottom of each caption releasing you from liability for any damage incurred as a result of your content should be permanently tattooed on your forehead.

As a lifestyle blogger, I understand the lure of sponsored content, giveaways, and affiliate networks. But having been adopted from South Korea at the age of three months, I know that nothing you’ve earned from sharing your adoption journey will ever make up for the long-term damage to Huxley’s mental and physical well-being.

“When the adoptee is separated from her birth mother, she undergoes extensive trauma. She will not remember this trauma, but it will stay in her subconscious as she lived it.”
– Nancy Verrier, The Primal Wound: Understanding the Adopted Child

Adoption is trauma. Many adult adoptees, myself included, are working every day to heal from ours. Did you know that we’re four times more likely to attempt suicide than people who weren’t adopted? Maybe this fact “went in one ear and out the other” like the warning from an expert about the severity of Huxley’s medical needs. If you’d spent more time reading through posts with the hashtag #adopteevoice instead of co-opting it for your own use, perhaps you would have heard our stories of pain and grief. 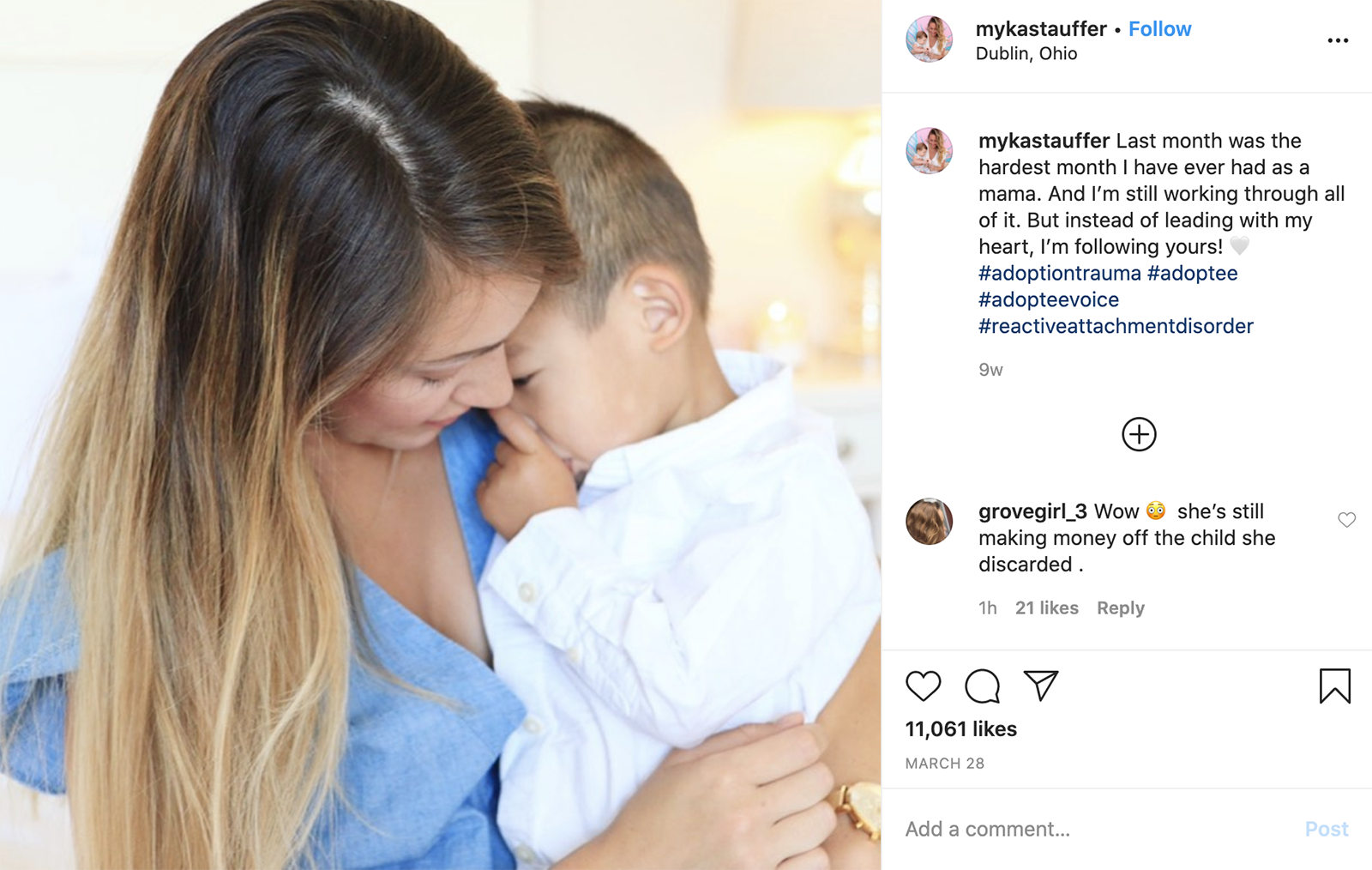 But, I suppose you chose the fairy-tale narrative of adoption, because it was more marketable. You and James are the textbook definition of White Saviorism; using terms like “orphan” to describe children whose families of origin weren’t privileged with the resources you have. When I found my birth mother in Korea as an adult, she told me that when I was born, she wanted to hold me until she died. Unfortunately, she lived in poverty and a country whose patriarchal values empowered my abusive birth father to relinquish me against her will.

How much money did you amass with the “fundraiser” to pay for Huxley’s adoption from China? Those pesky fees can get pretty steep. Can you imagine what Huxley’s birth parents could have done with $20,000-40,000? If you truly wanted to help “orphans” from other countries, there were other ways of providing resources besides convincing yourself that you were entitled to parent someone else’s child. All the money, opportunity, “good” intentions, and you still failed miserably. What a waste.

You told your followers this would never happen. After receiving his autism diagnosis, you said, “He’s our son and that’s that. We’re not gonna trade him in, we’re not gonna return him. He’s our boy.” Behind that false promise, it was clear even then how you truly saw Huxley- as merchandise.

We may never know how much income you and your husband earned at the expense of Huxley’s privacy and dignity. Although, we did notice the luxury Bali vacation you took with the rest of your family shortly after he mysteriously disappeared from your posts. I’ll admit, it has been awfully vindicating to watch your brand partnerships drop like flies. How does it feel to be tossed aside like yesterday’s garbage, Myka? Because, that’s just a mere taste of the abandonment adoptees face over their lifetimes.

When given the chance to atone for your despicable actions, you played the victim card and doubled-down on narcissism. You defended your choice by saying “Huxley wanted this decision 100%.” So you were either successful in gaslighting a four-year-old, non-verbal child OR you’re putting words in his mouth for your own gain. For the life of me, I can’t decide which is worse.

At the end of the day, this letter is not for you, Myka Stauffer. It is clear from your pathetic attempt to defend your actions, you are not interested in accepting culpability or telling the truth needed for real healing. The clickbait headlines, vapid articles and posts, fake White lady tears– all trash. You’ve even monetized your “apology” video with ads; laughing all the way to the bank.

This letter is for Huxley (or whatever name he claims someday as his own). For the day he realizes his most personal trauma was not only promoted and publicized for the world to see, the people entrusted with his protection profited from that pain.

We’ve known your heartbreak, too. The adult adoptees following your story felt the agony in our bones. It’s been engrained in our DNA since infancy. It may be difficult to see the words or hear our voices. Myka is doing what so many in this industry have before—deleting our comments, blocking us from engaging, trying to make us feel as though our experiences don’t have a place in the narrative. But your story matters. Our stories matter. And they are only ours to tell, if and when we decide it feels right.

Please remember this, Huxley. Repeat it as many times as you need to until it becomes as much a part of your story as the trauma. You are not disposable. We fought for you long after Myka and and James gave up. You weren’t alone, and you never will be again. 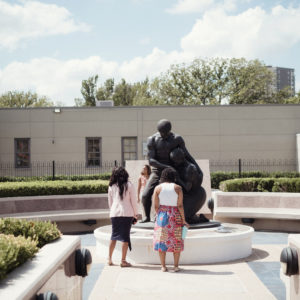